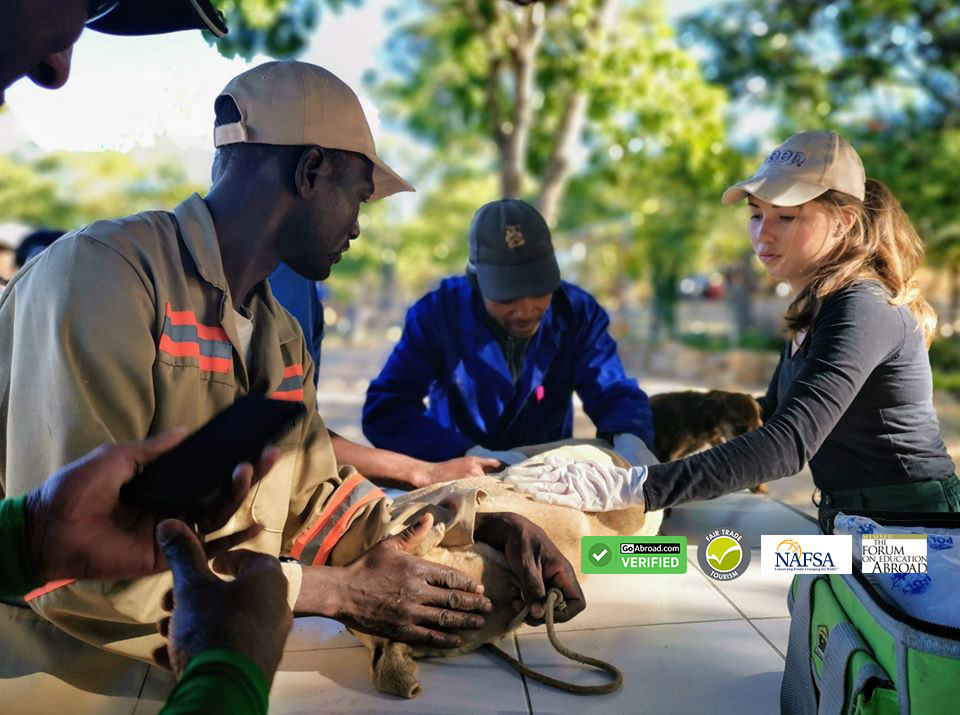 Best Practice for Finding, Landing & Excelling at Volunteering in Africa

A CITY ESCAPE WITH BUBBLES AND WILDLIFE IN HARARE

We are running a little late, but we make it just in time for the start of the tour phew! Of course, we missed the first bit of the briefing but I’m sure I’ll get just enough afterwards to stay safe and respectful to our hosts Wild is Life of the Zimbabwe Elephant Nursery. Along with my filming gear in hand, I am quickly thrown in to feed the hungry giraffes, which I try to do with grace, so that no one sees just how nervous I am…

Located next to the Robert G Mugabe International Airport, just 10 minutes from Harare city centre, the wildlife sanctuary is nestled between 350 hectares of wild Acacia trees, surrounded by a flower and tobacco farm. You really do not need to have 3 days in order to have the safari feel when visiting Zimbabwe, just hop on over to Wild is Life for a quick 3-hour tour and champagne.

First up is an interaction and education about giraffes, which is a crowd favourite as you get to pretend to be a tall mulberry tree, and the giants eat away at the leaves. Be careful though, you have to have a bit of stamina and upper body strength to do this activity as they do not like the stem and branch, but only the leaves. So they will slip out their long long tongues to strip away the leaves in a jerking motion that needs you to hold the stem tightly.

After giraffes comes the gentle giants, and the key reason why Wild is Life was established. Founded about 20 years ago, this animal sanctuary has become a safe haven for abandoned, abused and injured wildlife. And the story of Wild is Life cannot be complete without discussing Roxy Danckwerts, who as the legend goes, leaves her comfortable home to sleep in the Boma whenever they have an infant Ellie that needs round the clock care. I have been to many conservancies through our impact work with Tiritose Sustainable Travel, and it is the first time I came across this kind of caregiving.

Moyo, the first elephant to be rescued and cared for at the sanctuary remains there, despite 6 other ellies that came after her being released to stage 2 at a conservancy in Victoria Falls, where they increase the intensity in preparation to release the elephants back in the wild. Our guide mentioned how it will take up to six years for wild elephants to accept the released elephants as part of them wow! Moyo is still too fragile to make the 9-11 hour trip from Harare to Victoria Falls, and so she will receive more rehabilitation and bottled milk before going on to stage two. There is an ellie with a limp, and they suspect that it fell into a dried out waterhole in Hwange National Park, and broke its leg. By the time it was brought to them, it was too late to operate and repair, which means this ellie will never survive in the wild, so it will remain as part of the Zen family forever. Another story that just melted our hearts was a baby ellie rescued after mom was run over by a truck and locals devoured her for meat. Each elephant at the nursery has a uniquely sad story, and visiting the sanctuary gives you an opportunity to see the human-wildlife conflict that exists in Zimbabwe. We have developed a programme in Kariba dealing with exactly this challenge because it is one of the last remaining areas where there are no borders between the animal kingdom and the human world.

There is a Shona idiom that says, “Ukama igasva, hunozadziswa nekudya”, and like a true African host, Wild is Life goes all out with a tea/coffee break right after the elephant talk. We had seen the elephants feeding on their bottled milk, and had pretended to be trees ourselves feeding the giraffes, and now it was time for us to get fed. On the menu were several condiments, including a carrot cake yum yum! We were sipping on our teas/coffees when several impalas passed by, curious as to who these new people were, and from out of the blue, a lost Eland ran behind me, and before I could say E, it had jumped the over 1,5m high pile of logs with great ease. I have to say it remains my one wish to see an Eland jump over 2m from a standing position.

At around 5pm, you can start to hear the lions roar, they are accustomed to eating 6 times a week, their 5kgs of meat, at exactly the same time. It is rude to keep the king of the jungle waiting, and so we hurried to the den. The first thing to catch one’s eye is a surprisingly huge lioness, until our guide explained that it is in fact a lion, which was castrated because it was overly aggressive, and constantly fighting with other lions, and so instead of a good ol’ vasectomy, castration was the only option. The unintended effect was the loss of testosterone, which led to the loss of hair around the head, and now in the human world, it would be called balding. So, now you have a lion that looks like a lioness at Wild is Life, and an Elephant with an identity crisis and thinks it’s a buffalo at Imire Rhino & Wildlife Conservancy. Zimbabwe surely has everything.

You walk through a path dividing the lions and the lionesses, including the blind lion, that usually hides because being crowded just causes it great distress. The path leads you to an open area, where you have the two hyenas that are currently being prepared for release back into the wild, pending a few veterinary issues that one of them has going, and needs to be cleared. Gracefully walking from the north-eastern side of the sanctuary is Mike, the pangolin handler. Pangolins are the most trafficked animals in the world, and Wild is Life educates all visitors about this. They are naturally nocturnal, however, due to the danger posed on its life, they have had to train it to hunt for food during the day in order to preserve its life.

The rain had been threatening the entire afternoon, and I guess the hyena gods did not want us to disturb the hyenas from their meaty dinner. What was a threat, seized to be one, and without warning showers, heavy rains descended on us like fire balls. I wasn’t about to get soaked, and so I ran like the hyena had been let loose. What met me at the thatch surprised me, some warm towels to clean our hands, stuff out of an Emirates flight I tell you! A glass of champagne was on hand from the lovely service staff. Oda of course likes the finer things in life (although she does a good job pretending not to) and she enjoyed the canape type menu served to us in what seemed like 5 courses of food.

For more inspiration, follow them on their social media handles:

ZIMBABWEAN FESTIVALS: A GUIDE TO GETTING YOUR GROOVE ON